To the island of festivals, with "ONIDAIKO" (the Deity Mask Dance)
〜 Across from Niigata Port, come the reverberations of a timeless sound 〜

Sado is the island that has befriended deities. This is "ONIDAIKO" (the Deity Mask Dance) that has been passed down through the generations in the 120 villages on the island. To ward off disaster, or pray for a bountiful harvest, it wasn't to gods or spirits that the locals turned, but to deities. The style of the "ONIDAIKO" is different between each village, with no two being the same. The people of Sado look forward to the yearly festival when the deities go from house to house in each village, and they welcome them with a mix of emotions.
It is often said that deities should be feared, or repelled, but curiously in this land, they live side by side with the people, and are an integral part of the religious festivals. Sado was once full of nobility and cultured people from the capital. People and cultures from off the island were never rejected, but welcomed, accepted and adopted with open-hearted tolerance, and "befriending the deities (i.e. things that were different)” became the norm.
Since time immemorial Sado has built a unique lifestyle and culture. The people are proud of their history, the rich nature and food, and the entertainment such as Noh and puppet theatre. In the Edo period, people came from all over Japan, and Sado’s mines showed a lustrous dream. Travelers are also different, yet visitors will still feel that open-hearted tolerance.

The beat of ”ONIDAIKO” praying for the prosperity of the island. Interwoven with the voices of the people. The melody of the waves stretching out to the open seas. Listen carefully to hear this eternal sound touched by the spirituality and diversity of Sado. From Niigata port, cross the Sea of Japan and there is the island where the deities dance. 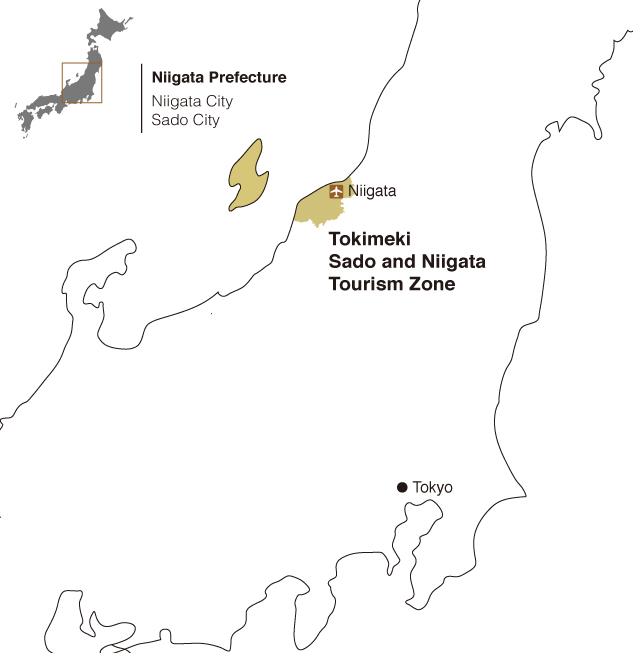 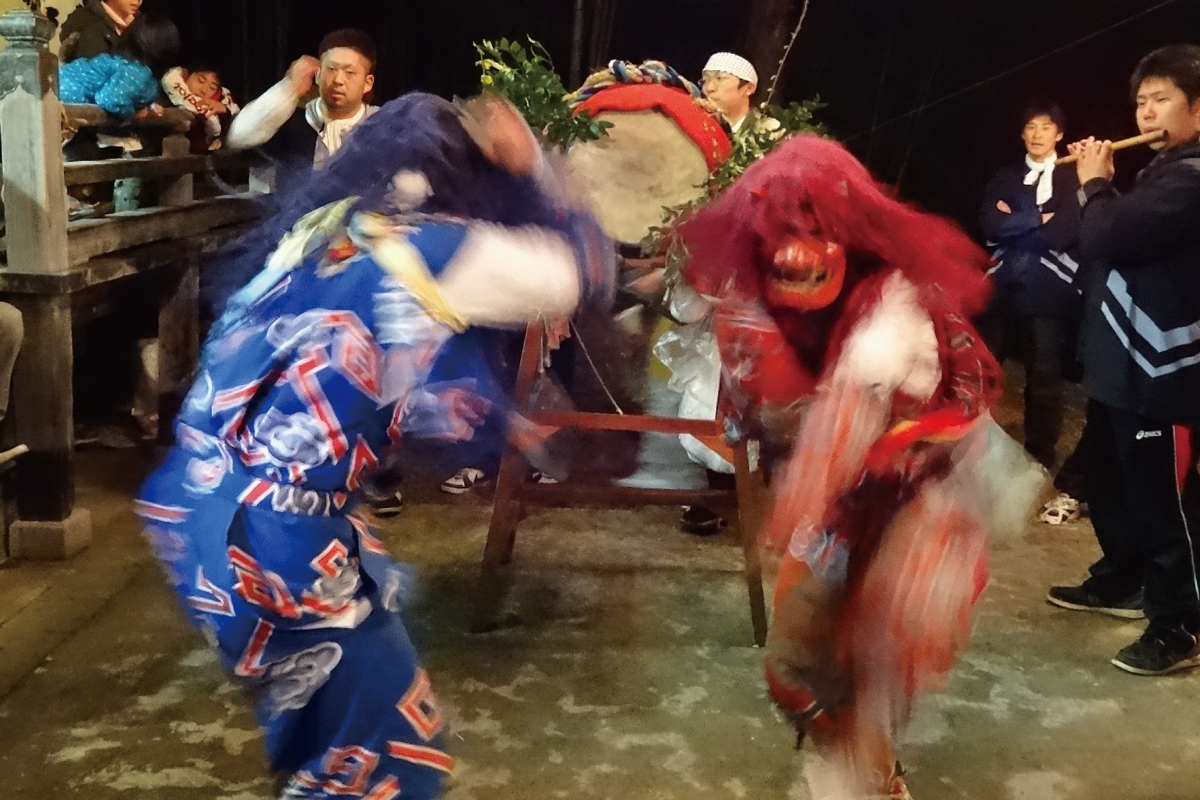 The rough winter seas are the image that comes to mind for Niigata and Sado, but Niigata City has a higher average temperature than the cities of Northern Kanto, and Sado has a mild climate thanks to the effects of the Tsushima current. Sado has mountains over 1,000 meters. The mysterious virgin forests and natural beech trees have been protected by the mists from the harsh winter winds and snows. There is a rich mix of nature and the long daylight hours create several environments on the lakes and plains that are surrounded by ocean and mountains. It has been said that Sado is like a miniature version of Japan. 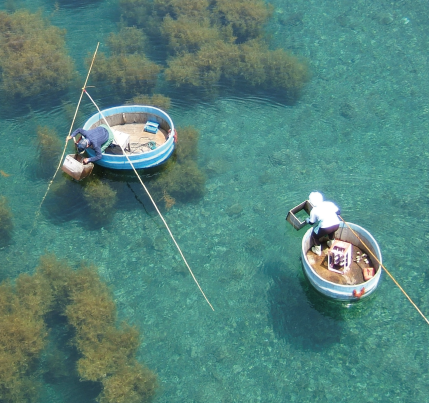 Sado is Honshu's largest island. The crested ibis coexists with the agriculture which is protected as a Globally Important Agricultural Heritage System, and the nature and people live side by side in one of Japan’s geoparks. The kanzo flower is known as the flower of the island, and from spring to autumn rare plants bloom and the island is covered in flowers. The gateway to Sado across the Sea of Japan is Niigata City with its two big rivers, the Shinano and the Agano. Plentiful rural districts stretch away across the Echigo Plains. 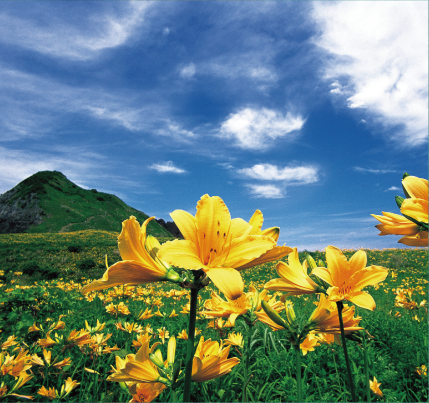 Sado, thanks to the gold and silver mines, has had many cultural influences with the mixing of samurai culture from the Edo period, aristocratic culture from exiles, and common culture from sailors on the cargo ships. It boasts one third of the Noh stages in the country and is a treasure trove of performing art traditions with Noh, comic dramas, the puppets of story tellers, Sado okesa and "ONIDAIKO" (the Deity Mask Dance) making up a rich cultural variety. Niigata City's Furumachi once thrived as Japan's leading entertainment district. Furumachi geisha were a symbol of the Minato-machi culture which can still be felt. 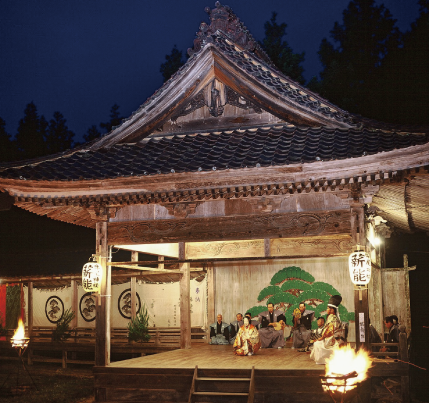 Spring in Sado means soft seaweeds. From summer to autumn the special climate produces nectarines and Ogi Biore black figs that are not produced in large quantities in other parts of Japan. Top level Sado koshihikari rice is grown with ecologically sound farming methods and is highly regarded. When the winter snow falls, there are amberjack, plump to survive the cold, and Nanban shrimp. Enjoy Japanese sake straight from one of Niigata City's 15 sake houses and fresh sushi made from seasonal, local fish. 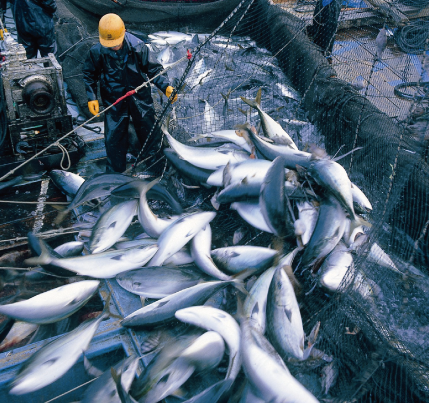 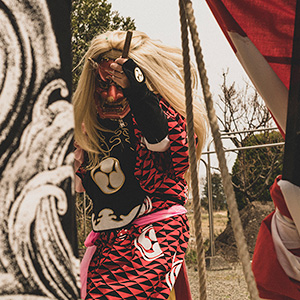 Uncover the mysteries of Niigata and visit Sado Island 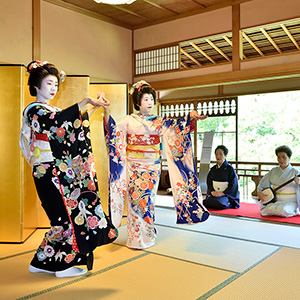 During the Edo Period, Niigata used to be the largest port in the Sea of Japan and was used extensively for trade. 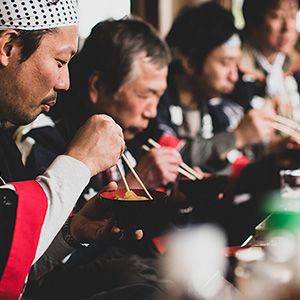 The Island Where Deities Dance

A traditional dance known as "Onidaiko" is performed on Sado Island. 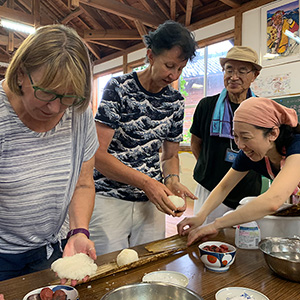 Simple and Delicious – The Traditional Cuisine of Sado Island

Here you may make your own bamboo bowl and enjoy a high-quality meal made with Iwakubi`s rice.