Several hundreds of thousands of years ago, due to movement in the earth's crust, 826 kilometers of complex ria coastline on the western edge of Japan came into existence. Off this coast are 208 islands including the Kujuku Islands which run from south to north, as well as Uku and Ojika Islands in the Goto Island chain. Part of the the warm Kuroshio Current branches off to become the Tsushima Current, and this flows around these islands. This complicated coastline and islands have gifted the locals a place to live and it is known as ‘Ura’ by those who use this sea as the setting for their daily activities.
As a result of the very rare topography of this coastline, a unique way of life is taking root.
The people who live on these islands and inlets rely on the sea as a place to make their living and survive in the so-called ‘Sea Wind Country’. Visitors who are coming to this coast to experience the four seasons should know about the stories.
The ancient story goes that long ago before human beings were around, with the cooperation of mother nature, the people of the sea landed and started to live on the coast and the islands here.
The history continues that this was the first place where people, things, skills and beliefs were exchanged with the outside world.
It is also the story of a port much like a smaller version of Japan, having an awareness of global society, it becomes a modern island state.
When visitors come into contact with a part of this, the place, the times, the hopes and dreams of the people who live there, their joys and sorrows, they can realise that it comes from this profound story. 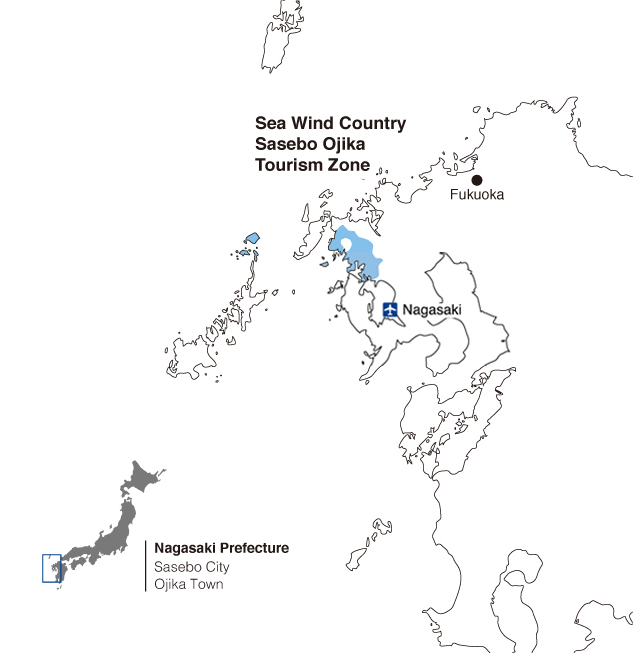 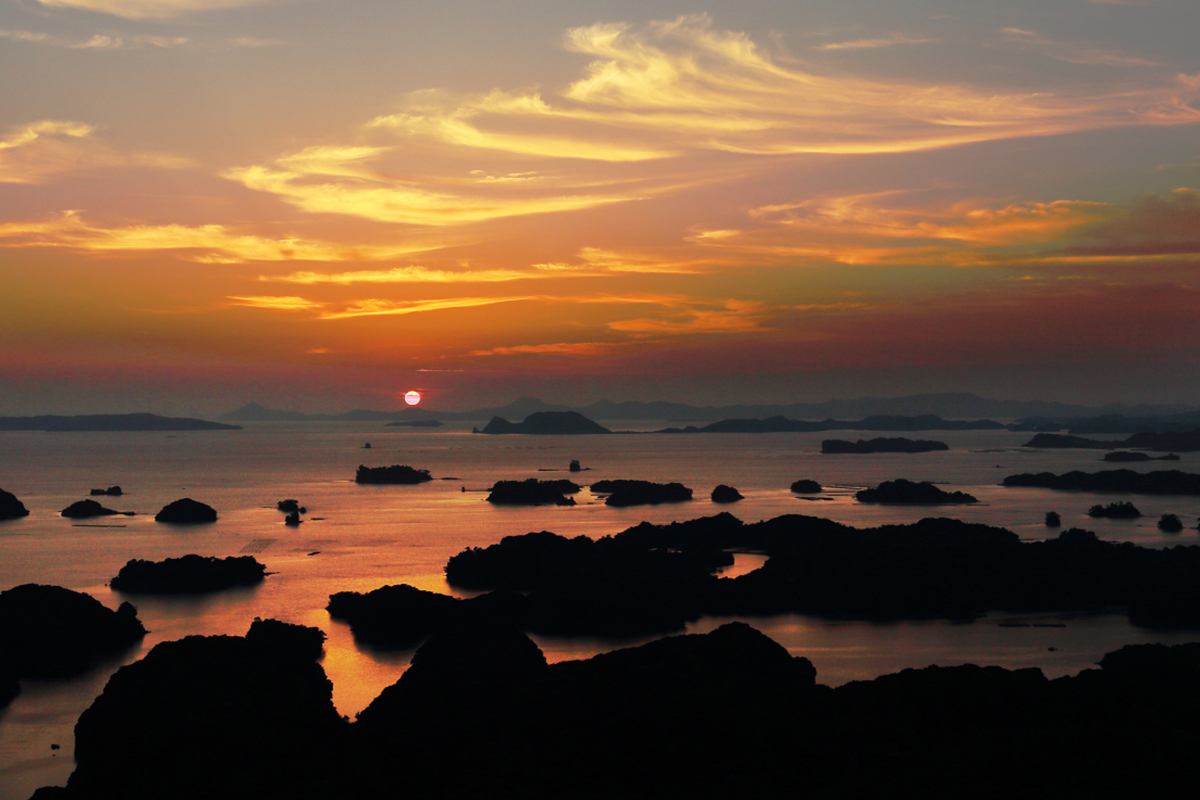 The area is part of the Western Sea climate zone, with the warm Tsushima Current coming off the Kuroshio Current and flowing through the waters around the Goto Islands. The average temperature is 17 degrees and the yearly rainfall is 1,920m. It is a pleasant climate, warm and rainy, temperate winters and relatively cool summers. 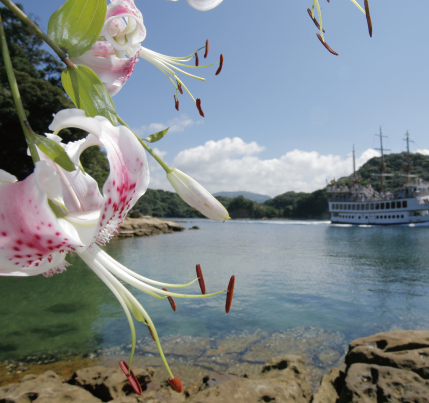 In the north western part of Kyushu, the most westerly part of Japan, along 826 kilometers of ria coastline and consisting of more than 400 islands is the Saikai National Park, a marine nature park that is home to a huge variety of creatures and also different natural environments. In the Kujuku Island area there are 208 islands clustered about, with gentle mountain shapes dotted around. It is the representative image of the island nation of Japan and is rich in beautiful scenery. 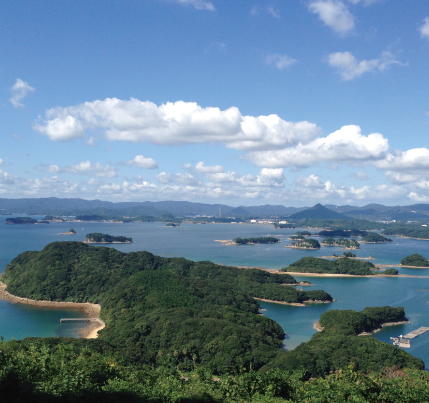 As Japan's most western point, and being located closest to the continent, this area is full of places where you can see the history of its contact with other cultures. This is where the ships of envoys would wait for favorable winds, and the sea where the Matsuura clan of medieval warriors were active. Thanks to the sea currents in the area this is where cultures arrived from the the south, and since the sixteenth century, signs of the history of the prosperous trade with faraway Europe are visible. It is from these western seas that cultures have arrived. They have been crossed with the unique traditions of island Japan, polished, and adopted to become part of Japanese culture. 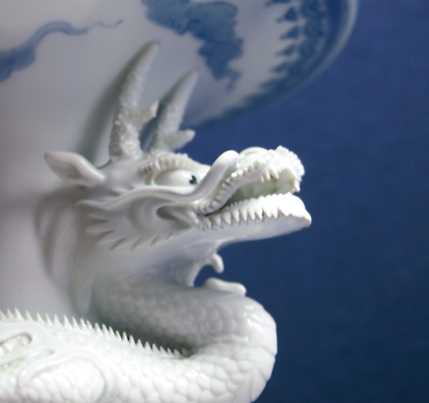 Mountains covered in evergreen forests protect the sea, and this region is proud of its plentiful marine resources. Many islands have red soil, rich in iron, that nourishes the root vegetables, wagyu beef cows are raised, and fertilizer produced. Rich ingredients combined with the exposure to overseas influences have encouraged a very unique culinary culture. There are plenty of gourmet brands that have originated from around here. For example, the Sasebo burger which came from contact between the locals and American military based here after the war; and as steak spread to the normal population it was seasoned specially for the Japanese, and lemon steak was created. 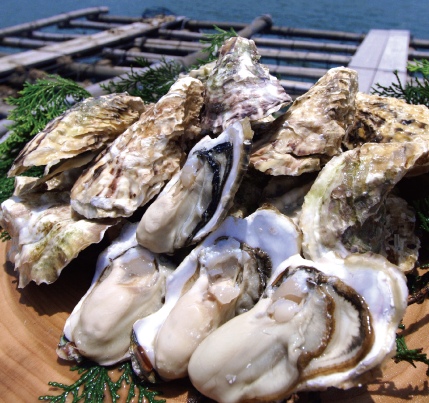 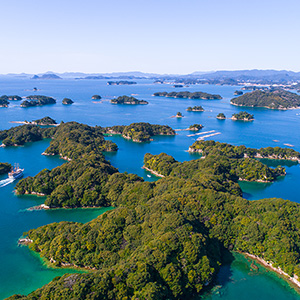 A Journey to the Land of Sea and Wind

A charming coastal city with a unique history serves as a gateway to a hidden island. 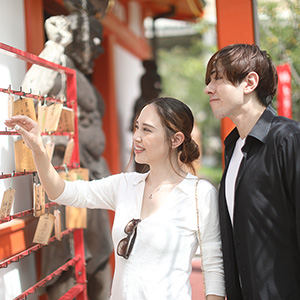 The Sasebo city provides an intriguing contrast to the more common scenes of modern Japan. 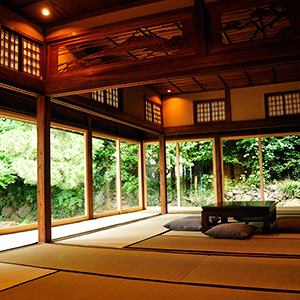 For those who wish to slip back in time and discover the traditional charm of Japan. 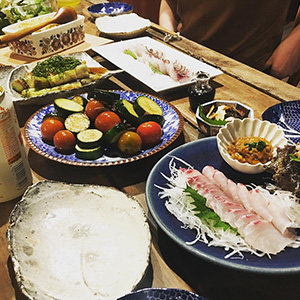 Peek behind the tourism scene, diving deeper into a local culture not as a tourist.